The Old Sandbachians’ Association exists to uphold the traditional values and character of Sandbach School, through the maintenance of friendships past and present and the provision of beneficial support to the School by mutual agreement.

To support this we organise a small number of events each year to renew and maintain friendships and raise funds. Through the website we want to encourage all Old boys to get in touch and share recollections of school life to enrich the memories of all Old boys and the current school fraternity.

The oldest person on our database left the school in 1937.

The Association has been in existence for more than 100 years, with references to the organisation in copies of the Sandbachian magazine from before the First World War. It has always been a means of staying in touch, networking and supporting Sandbach School.

In years gone by, many pupils of the school would stay local, establishing or working in family businesses or great industries synonymous with the history of Sandbach and surrounding area in the 20th century, like Foden’s, ERF, Roberts Bakery to name a few. Other old boys would travel further afield with careers in politics, the armed forces, sport and education.

In the 21st Century the OSA is still going strong and former pupils are even further afield. We have contacts in Australia, USA, the Middle East and Europe. We all share a great heritage of being a former pupil of one of the best schools in the country, and the OSA remains committed to supporting Sandbach School as the OSA has for over 100 years.

Pages from the 1902 edition of “The Sandbachian” magazine 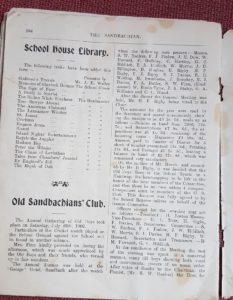 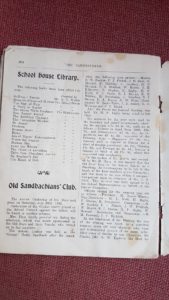