Old Sandbachians’ Weekend and opening of the museum cabinet

Former pupils of Sandbach School, belonging to the Old Sandbachians’ Association recently held their AGM and Annual Dinner at the school. The opportunity was taken to formally open the bespoke extension to the museum cabinet in which a vast array of memorabilia from the past is displayed including caps, blazers, photographs and even the headmaster’s cane from over a century ago.
Pictured above are the President Joe Riley and Headteacher Sarah Burns declaring the museum open. The whole showcase has been funded by generous donations from members of the Association and crafted into the school chapel, which interestingly once served as the dining room for school boarders.

It was refurbished by old boys and then dedicated 60 years ago by the then Bishop of Chester Rt. Reverend Dr Gerald Ellison, who can be seen in the picture below. 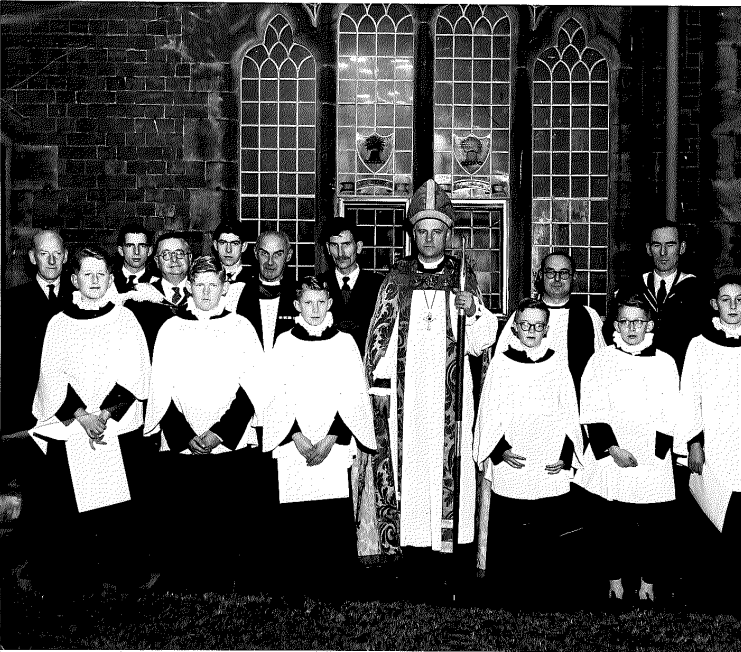 The Headteacher thanked everyone for their generosity, expressing just how important the museum was to the ethos of the whole school. She explained that for all new boys joining the school, part of their induction is a visit to the chapel where they learn about the importance of the school’s history and it’s Christian heritage from which every generation benefits.

The Old Sandbachians’ Weekend is an opportunity for former pupils to renew old friendships, enjoy comradeship and reminisce about old schooldays.

A most enjoyable dinner was provided by the Sodhexo Team in the school refectory and then followed by short speeches from the President, Members of the Head Boy/Head Girl Teams, the Headteacher and concluding with guest speaker Alan Atkinson, former longstanding Geography Teacher who is well known to many generations of Sandbach schoolboys.

A service in the school chapel was held on the following Sunday morning when a sizeable congregation heard an inspirational testimony and challenging address given by Headteacher, Sarah Burns.

The Old Sandbachians’ Association is always keen to hear from former pupils of all ages and school years who would be interested in connecting with them and can do so by emailing : secretary@oldsandbachians.co.uk or calling 01260 297967 or via the Facebook page: https://www.facebook.com/groups/oldsandbachiansassoc/

You can find many more Old Sandbachians photos on Gilbert Turner’s flickr site.